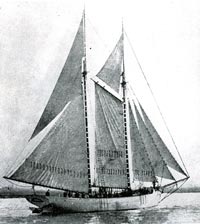 Sparkling like a green gem against the velvet blue of the ocean lies the tiny island of Pitcairn. Pitcairn is far, far away from any other island, or from the routes used by ocean going ships. In 1789 the crew on board of the Bounty mutinied. They got rid of their captain and sailed on looking for a place where no one would ever find them. They found Pitcairn and settled there but things didn’t go very well. The crew started fighting and killing each other. By the time the island was discovered eighteen years later there was only one of the crew still alive along with women and children.

In 1876 James White and John Andrews sent some papers to Pitcairn Island, but they never heard if they got there. John Tay, a Seventh-day Adventist ship’s carpenter, finally managed to get to Pitcairn Island. There he taught the islanders of Jesus’ love and of His Sabbath. Mr. Tay finally returned to the United States, where he told exciting stories of his time on Pitcairn Island. The General Conference decided to build a little sailing ship to go to Pitcairn and other far away islands in the Pacific Ocean. This would be the very first Seventh-day Adventist Mission Ship! Enthusiastically children, teens, youth and adults raised the money needed to build this boat. It was named Pitcairn, after the beautiful island. In 1890 it sailed into the Pacific Ocean carrying missionaries to these islands. It sailed back and forth in the mighty Pacific for 10 years – always carrying, everywhere it went – the story of Jesus and His love.